Our commitment to helping our Alma Mater has pushed us to do better and to aim for more. Know more about our organization, how we started, and how we plan to accomplish our goals.
Who We Are

Established in the state of Maryland on July 26, 1986, The AWOGA Washington Branch, a qualified tax-exempt non-profit charitable association, provides a local medium in the Washington DC Metropolitan Area for AWMS alumnae and well-wishers to be highly engaged as a community in support of The AWMS.

Aligning with other branches of AWOGA, the mission of AWOGA Washington, as the stated article of Incorporation and By-laws is to:

Membership in the Association is open to any and all bonafide Annie Walsh Alumnae who are residents of the United States, and who have met membership dues requirements. Past AWMS pupils who are visitors in the United States are eligible to become associate members for a period not to exceed one year.

All AWMS alumnae are eligible and are invited to become members of the AWMS Old Girls Association (AWOGA). Provisions for membership and governance of the association are detailed in the association’s by-laws. The association is managed by the board of elected officers. Meetings are held on the first Saturday of the month, January through April, and August through December starting at 5:00 p.m. (prompt), by conference call or at announced venues.

The school is divided into six houses named after the first principals.

O God who art the author of all goodness,
look down in mercy upon this school, and
bless all those who belong to it, present or absent.
Be with those who have gone from amongst us,
and grant that in all the duties of their larger lives,
may they remember whose they are, and whom they
ought to serve through Jesus Christ our Lord.

In 1816, the Anglican Church Missionary Society opened a small private school for girls in the mountainside village of Charlotte in Sierra Leone with only eight students on the roll. The school began with a vision to educate and train young African girls in pursuit of excellence in all areas, including high academic performance, sound discipline, and a solid Christian foundation.

Annie Walsh Memorial School was named after an English girl whose dream was to become a missionary in Africa. Unfortunately, Annie Walsh died in a tragic accident at the age of 20. Her parents established the Annie Walsh Memorial Fund which was added to monies collected by the Christian Missionary Society of the Anglican Church and used to erect the first school buildings.

In 1865, the school moved to its present location in Freetown on Kissy Road and was formally named the Annie Walsh Memorial School in 1878.

To train young African girls in pursuit of excellence in all areas, including high academic performance, sound discipline and a solid Christian foundation.

Over the years, the school has consistently outperformed its peers in terms of academic achievement, making it the most prestigious secondary school for girls in Sierra Leone. Academic excellence has been one of the major thrusts of the School over the years. For example, the following ‘firsts’ in the country are products of the school.

Significant Events in the School’s History
Roll of Principals

(First African Principal of the School) 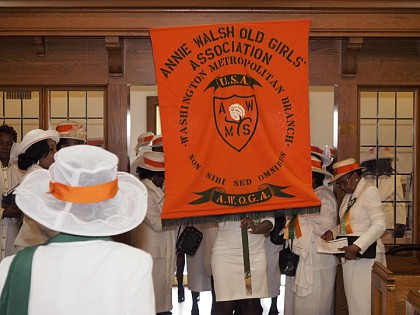